Indian Polity & Governance prevailed in this year’s CS Preliminary Exam. There were 23 questions from this subject.

There are many topics that are to be discussed but in this blog I am going to shed light on the questions of Indian Polity asked in prelims.

The subject is vital for this examination but personally I liked the questions more is because this is the way we have been discussing the subject in the classroom. There is no doubt that candidates with conceptual clarity would have found the questions entertaining.

This pattern again reminds aspirants that this is not the subject that is to be mugged up, it’s not about memorizing the articles of the Constitution only. It’s more about concepts, it’s more about debates.

Below I have given the answers of the questions with explanations where required.

I have attached images from the books of Laxmikanth & Subhash Kashyap to prove the points.

Following books are strongly recommended in order to have better understanding of the subject. 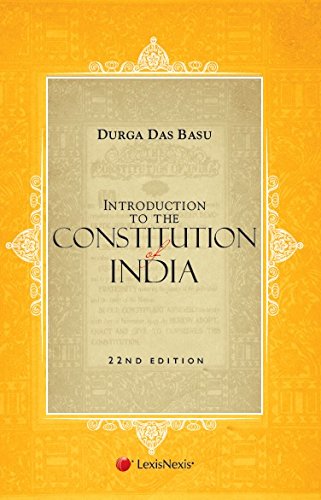 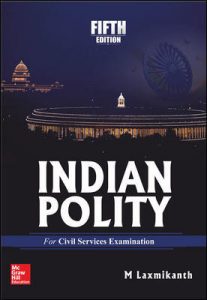 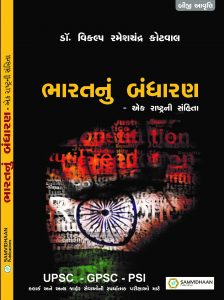 1) For election to the Lok Sabha, a nomination paper can be filed by

a) anyone residing in India

d) any citizen of India

Why not option a? – in that case even an alien residing in India could contest the election

Why not option b? – explanation give in the image below

Why not option c? – any citizen includes even children & others who are not electors(whose names don’t appear on the electoral roll) 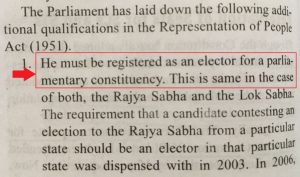 2) In the context of Indian History, the principle of “Dyarchy” refers to

a) Division of the central legislature into two houses

b) Introduction of double government i.e., Central and State governments

c) Having  two sets of rulers; one in London and another in Delhi 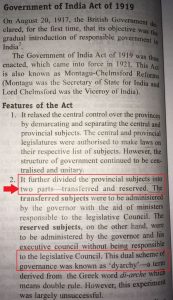 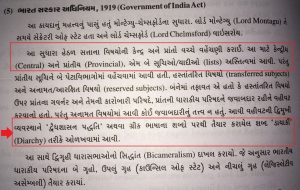 1. In the election for Lok Sabha or State Assembly, the winning candidate must get at least 50 percent of the votes polled, to be declared elected

2. According to the provisions laid down in the Constitution of India, in Lok Sabha, the Speaker’s post goes to the majority party and the Deputy Speaker’s to the opposition

About statement 1 – candidate is not required to get at least 50 percent of the votes, he just needs to secure maximum number of votes among all

(Edited : Find discussions in the next blog)

1. The Election Commission of India is a five-member body

2. Union Ministry of Home Affairs decides the  election schedule for the conduct of both general elections and bye-elections

(Please note that for this question in the original blog, answer given was C. It was by mistake. Though it could be inferred from the explanation given below, correction has been made)

It is a known fact that Election Commission of India is a three-member body.

Now for the remaining two statements, we don’t find the details in Laxmikanth. The same details can be found on the official website of Election Commission of India.(Images given below) 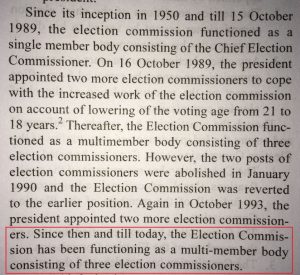 7) Which of the following are not necessarily the consequences of the proclamation of the President’s Rule in a State?

1. Dissolution of the State Legislative Assembly

2. Removal of the Council of Ministers in the State

3. Dissolution of the local bodies

8) Which of the following are envisaged by the Right against Exploitation in the Constitution of India?

1. Prohibition of traffic in human beings and forced labour

3. Protection of the interests of minorities

4. Prohibition of employment of children in factories and mines

Abolition of Untouchability is a part of Right to Equality.

Protection of the interests of minorities is a part of Cultural & Educational Rights. 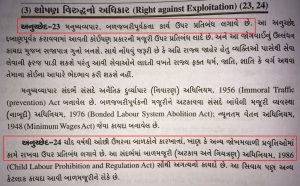 9) The main advantage of Parliamentary form of government is that

a) the executive and legislature work independently

b) it provides continuity of policy and is more efficient

c) the executive remains responsible to the legislature

d) the head of the government cannot be changed without election 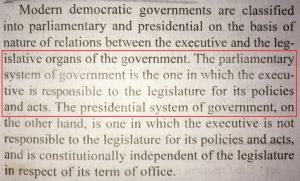 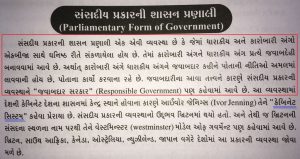 10) Out of the  following statements, choose the one that brings out the principle underlying the Cabinet form of Government

As highlighted above, parliamentary form government is also known as cabinet form of government. 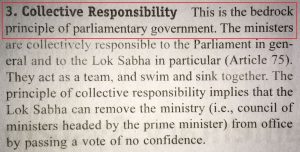 11) Which one of the following is not a feature of Indian Federalism?

a) There is an independent judiciary in India

We do have independent judiciary, we do have division of powers between the Centre & the States in schedule-7 of the Constitution and the federating units have been given unequal representation in Rajya Sabha(unlike in the Senate in USA). 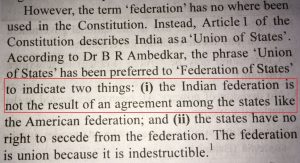 12) Which of the following statement/s is/are true of the Fundamental Duties of an Indian Citizen?

1. A legislative process has been provided for the enforcement of these duties

2. They are correlative to legal duties

There is no legislative process provided for the enforcement of Fundamental duties in the Constitution. Constitution just mentions duties, no process for their enforcement.

Second statement has been discussed in great detail in the classroom(not possible to discuss here for now, if possible will narrate it in a separate blog)

13) Which one of the following objectives is not embodied in the Preamble to the Constitution of India?

a) Liberty of Thought

Students must recall the “recitation of the Preamble” we used to do in the classroom. I hope everyone would have it by heart. 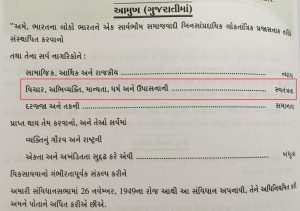 a) the intelligence and character of ordinary men and women

b) the methods for strengthening executive leadership

c) a superior individual with dynamism and vision

15) In the context of India, which one of the following is the correct relationship between Rights and Duties?

a) Rights are correlative with Duties

b) Rights are personal and hence independent of society and Duties

c) Rights, not Duties, are important for the advancement of the personality of the citizen

d) Duties, not Rights, are important for the stability of the State

While studying theory of duties, we come to know & realize how closely they are connected with the rights.(Discussed in great detail in the classroom). 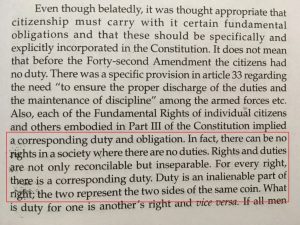 16) The mind of the makers of the Constitution of India is reflected in which of the following?

b) The Fundamental Rights 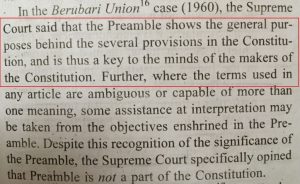 17) The Parliament of India exercises control over the functions of the Council of Minister through?

A student of Public Administration would find it easier to answer(Chapter – Accountability & Control).

All the three devices are there for the legislative control over the executive. 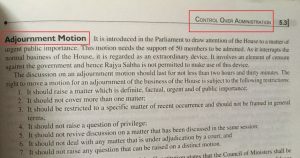 18) With reference to the Parliament of India, consider the following statements

1. A private member’s bill is a bill presented by a Member of Parliament who is not elected but only nominated by the President of India

2. Recently, a private member’s bill has been passed in the Parliament of India for the first time in its history

Private member is private member whether elected or nominated. So first statement is wrong. There is no such distinction as regards bills being presented by them.

Below I have given the image from the book called Our Parliament by Subhash Kashyap to prove that second statement too is incorrect. 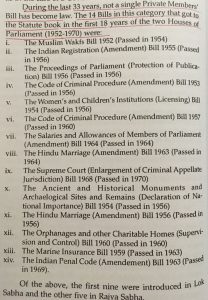 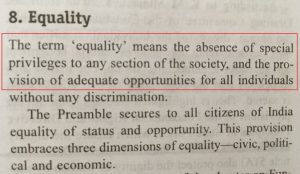 20) Which principle among the following was added to the Directive Principles of State Policy by the 42nd Amendment to the Constitution?

a) Equal pay for equal work for both men and women

b) Participation of workers in the management of industries 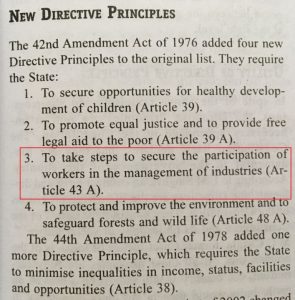 21) Which one of the following statements is correct?

a) Rights are claims of the State against the citizens

c) Rights are claims of the citizens against the State

d) Rights are privileges of a few citizens against the many

The question I liked the most as we had repeatedly discussed this topic in the class. What could be more beautiful!

One needs to read Political Science NCERT in detail in order to answer such questions.

With reference to the Constitution of India, the Directive Principles of State Policy constitute limitations upon

Which of the above statement/s is/are correct?

DPSP are in the nature of instructions or recommendations to state(legislature as well as executive) they cannot be said to be limitations upon the state’s action.